Substantial help in situations of crisis

Hardships and major problems exist in many countries around the world, even on our own doorstep, right here in Austria. The majority of our funds go to institutions and organisations, but also to individuals in urgent need of our help, people who receive our financial support from the money that we have earned through our commercial activities.

We distinguish between two groups:

We publish our donation activities in an Impact Report, which you can download as a PDF file below. We have pursued most of our projects for years and will continue to do so. We want to inform the public about the projects we support with our donations, and about the organisations that we trust.

In the Impact Report you will not only find figures and sums, but also insightful information about the people behind the projects: people who are led by their Christian faith in their untiring quest to change this world for the better.

Every year, a large number of donations go to individual recipients. As in the years before, in 2013 Klosterneuburg Abbey gave financial support to the people affected by the devastating flood. The abbey also donates to emergency services such as the police and the water, mountain and fire rescue services. The Red Cross was supported, too, for instance when organising holidays for heavily over-burdened families with chronically ill or traumatised children.

Financial help was also provided for numerous families and individuals in situations of social hardship. Among these are the inhabitants of leasehold properties belonging to the abbey, who due to tragic events cannot afford to live there any more. In such and other cases, each request for a donation is thoroughly examined so that every cent will be received exactly where it is needed.

Financial support is also given to sheltered workshops and associations where young people can spend their spare time with others in a meaningful way, such as basketball or running clubs. Parish schools have also been funded time and again. We also make interconfessional donations to communities of different beliefs in Austria and other countries. 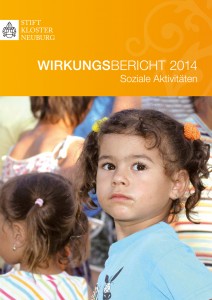 We publish our donation activities in a Wirkungsbericht (Impact Report), which you can download as a PDF file in German. We have pursued most of our projects for years and will continue to do so. We want to inform the public about the projects we support with our donations, and about the organisations that we trust.